The Other Bay Area

They call it the Bay Area, and it’s on the west coast. A large metro area with Spanish roots, spanned by numerous bridges and causeways, known for its relaxed lifestyle and superior seafood. Are we on the same page of the atlas yet? The answer to today’s geo-quiz is Tampa Bay, on the west coast of Florida.

When I tell my California friends about my Florida vacation, they screw their foreheads into puzzled furrows and ask why? Why go THERE? If the East Coast is a mysterious foreign land to most Californians, Florida is the equivalent of Darkest Nowhere, where friendly serial killers and retired New Yorkers rub shoulders with Cuban gangsters and mullet-topped gator hunters under the sticky heat of a  Disney sun. And all of that may indeed be true for the east coast of Florida, but not for the west side.  Except, of course, for the mullet, which is native to all areas of the state.

But in west Florida the mullet is more than just a haircut, it’s also a fish. A small fish, typically smoked and mashed into something that looks like tuna salad, but is a million times tastier.  It is one of the appetizers at Waltz Fish Shak, an insanely great restaurant in Madeira Beach, just north of St. Pete on the Gulf side. Which is number one on my list of things to do on the Other West Coast.

Walt’z Fish Shack – Located in a brightly painted old house at the edge of the John’s Pass tourist district, just a few blocks from Hooter’s and Bubba Gump, Walt’z is one of the best seafood restaurants anywhere.  The chalkboard menu is short – three starters, three entrees, one dessert.  Everything is super fresh, and when it’s gone it’s gone.  If they have it, get the grilled grouper with rice and slaw. Or the crab cakes. Or the softshell crab. And don’t even think of leaving without a slice of key lime pie – they only have one dessert for a very good reason.

St. Pete Beach – Miles of fine white sand, water warm enough to swim in, great beach bars, this is one of my favorite beaches anywhere. And the sun even sets in the right direction – over the water! It’s like Mexico but without the nagging beach vendors and severed heads. Plus you can eat the salad without getting sick! But why eat a salad when you can have a big messy cheeseburger at Sandbar Bill’s Beach Bar, one of the amenities at… 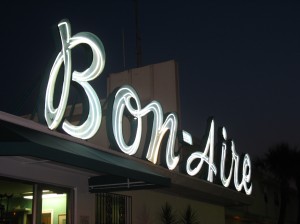 The Bon-Aire Resort Motel – If you’re the all-inclusive type you can stay at one of the pink monstrosities down the beach, but if you love mid-20th century style you must stay at the Bon-Aire. Built in 1950, it is a fine example of mid-century architecture and just an all-around great place to stay. A clean, quiet, spacious room on the beach with powerful A/C and all the amenities goes for well under $100. And if you want to stay longer they have “efficiency” units, which are nice little apartments with full kitchens. Laze around on the beach all day and run up a tab at Sandbar Bill’s – you will not be disappointed. I’m not going to tell you what to drink, but the banana dacquiri is exceptional, with a velvety texture and a nice extra tot of rum poured into the straw.

The Dali Museum – If you’re a fan, you must go. This is the largest and most important collection of the artist’s work anywhere in the world, including Spain. Trust me – I’ve been to the Dali Museum in Figueres and the artist’s home in Port Lligat, and this is a must-see collection, notable for its numerous “best of” works: Daddy Long Legs of the Evening, The Disintegration of Memory, Columbus Arriving in the New World, DNA, Nature Morte Vivant – the list goes on and on. The building itself is also pretty stunning, and it’s in a great location on the St Petersburg waterfront.

Ybor City – Across the causeway in Tampa, Ybor City is the old cigar-rolling district, full of gorgeous old brick buildings, iron balconies, and other well-preserved architectural relics. Though it’s a bit touristy, it’s still well worth a visit, especially if you’re in need of a tattoo, a cigar, or a place to get trashed on Spring Break. Or if that’s not your style, check out…

The Tampa Brewing Company – Located in Ybor City, this is a truly great brewpub in an area not known for its craft beers. It’s an ambitious operation that may have as many as 18-20 house-made beers on tap, all respectable and some outstanding. The porter, the pale, and the seasonal ESB were all standouts on my visit. Throw in a solid kitchen, friendly staff, great atmosphere, and the historic location, and it adds up to one of the best brewpubs around.

Arco Iris Restaurant – Tampa isn’t Cuban the way that Miami is Cuban – it’s more Dixie and Conch – but there is still a sizable Cuban population here, and many good Cuban restaurants to choose from. We were directed to this one by a friend, and were not disappointed. It’s owned by a couple who came over on the Mariel boatlift, and it’s unapologetically authentic. Soups are especially good, and of course the Cuban sandwich.

Of course there’s a lot more to do, like thrifting, buying stuffed alligator heads, and getting fabulously sunburned. I will be back.

This entry was posted on Thursday, June 30th, 2011 at 5:15 pm and is filed under All about me, Eating & Drinking, Travel, Uncategorized. You can follow any responses to this entry through the RSS 2.0 feed. You can leave a response, or trackback from your own site.