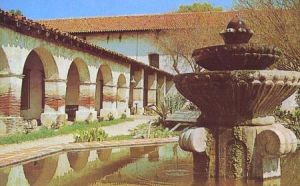 Like every other graduate of California’s public schools, I learned about the Spanish missions in fourth grade by building a model out of cardboard and sugar cubes. But unlike most of my classmates I kept an interest in the subject after my voice changed, and went on to discover a lot of things that my teachers never mentioned. Did you know, for instance, that the soon-to-be-saintly Father Serra was in fact a notorious flagellant who liked to preach the gospel stripped to the waist, scourging himself with chains and burning his flesh with hot candle wax? Or that each of those quaint little mission cemeteries is actually a mass grave, packed with the bones of thousands of natives? No wonder the 4th grade lesson plan focused on arts and crafts.

Over the years I’ve managed to visit most of the 21 mission sites, and last weekend I cut another notch in my traveling stick, touring the long-shuttered Mission San Miguel Arcangel, just north of Paso Robles. Nearly destroyed by earthquakes, it has been closed to the public since the San Simeon quake of 2003, and only recently reopened. While most of the complex is still a private retreat for Franciscan monks, visitors can once again enter the main church and tour the adjoining wing of the quadrangle, which dates back to 1816.